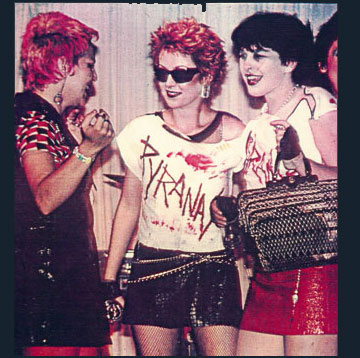 Having it doesn’t need your approval

Stating the obvious to kick things off; music cultures have a style. Country music throughout the last century has maintained its folk patina. Jazz in the 1920s was a sub-cultural whirlwind of brass fashion. Psychedelic rock in the 60s and 70s had a naked grass roots image. Mod rock had its own sleek rebelliousness. Punk rock, metal, glam metal, disco, pop, and synth-pop — these words invoke a cultural image, a fashion. Gangster rap in the 90s, grunge, trad music, My Chemical Romance and The Stone Roses. You get it.

It’s an image thing. I’m not raining on the sub-cultural parade with some form of higher musical authority — there is a connection between genre and image. It’s one that I am sometimes fascinated by and enthusiastic about — and other times not so much. There are volumes of words that need to be sprayed all over the music industry in relation to its exploitation of image and musical genre. But for now, we are talking about the anything goes fluidity of rave culture.

The history of rave culture in Ireland is documented in some of the most reality jarring and ‘wtf-were-you-doing-in-the-90s’ videos, articles and photos that you’ll find in our nation’s musical history. In 2017, rave culture has a different presence in society. Take from that what you will, but what I can appreciate is the lack of consistency and the abundance of nothing specific. If there is an image that runs through this sub-culture, it’s “have it the way you want, nobody cares — you might as well be comfortable, but it’s your call’’. To me, that freedom of movement and allowing yourself to fully submerge yourself in the music while keeping most of a pint intact is crucial to the experience. This means comfort is key. At the same time, it is what you make of it, and no unconscious social vibes are going to pressure you into any one kind of experience or style of anything. However, I do feel a common thread in the fibres of rave culture, one that supports the music for itself and not the image of the music for the sake of appearances. So please, wear platforms, bring disco back, be a goth, wrap dreads around your face, and bring a ‘no nukes allowed’ sign to the dance floor — in all cases, come for the music.